HEADACHES: Patient has been suffering from debilitating migraines and headaches that occur weekly, sometime daily, and can last for hours. On the worst day she rates her pain as 8/10. In her initial exam, she states during a migraine she feels jaw pain and pain behind the eyes. She has been powering through  most of her symptoms, but in reality it has been affecting her ability to concentrate Sometimes the pain is so severe that it prevents her from going to work or makes her work day more difficult. Stress, lack of sleep, and changes in diet can aggravate the condition.  On the other hand, catching up on sleep, being in cold and dark rooms, and having quiet time can help to alleviate it to some extent. She has tried seeing an eye doctor, chiropractor, and regular physician. She has had an MRI and they have found no issues.  She tried a medication that only was effective for two years, and then went onto trying several other medications. Prednisone and botox both have helped tremendously, but she would like to gradually be able to not have to rely on either. She has had botox treatment for her migraine treatment every 3 months for the last four years, and a total of 16 times.  The last botox treatment she received was a week prior to this exam and the last two and a half months she has been taking medication as well.

WRIST PAIN: She has wrist pain, which on the worst day she rates the pain as 6/10.  When she went to the doctor for it they did find a ganglion cyst which she had removed, but it did not alleviate her pain. She has also tried cortisone injections but it did not help with her pain either.  Icing, wearing a wrist brace, wrapping, and resting can alleviate some of the discomfort temporarily. However, bending the wrist backwards and putting pressure on the wrist in any way can aggravate it.

NOSE BREATHING: She has always had trouble breathing through her nose ever since she was a child.  The discomfort level ranges from time to time, and can switch between the left and right side, but is something she deals with on a daily basis.  Sometimes it is at its worst at night when she is lying down. She has tried allergy medication but has seen no improvements. She also visited an ENT physician, but they did not find anything wrong.

KNEE PAIN: On the worst day she rates the pain on a 5/10.  Physical therapy helped a little bit. She feels the most discomfort when running, especially downhill where there is more pressure on her knees.


PATIENT LIFESTYLE: Patient leads a busy life in terms of balancing time with family and work.  She also likes to partake in running and gymnastics. She hopes that with the acupuncture treatment she can get back to not missing out on time with family and activities she enjoys doing and continue being able to be more active. 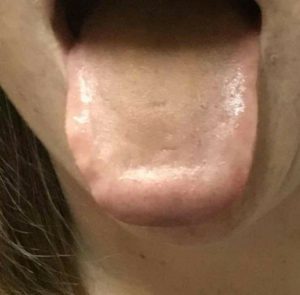 [Tongue at time of Initial Exam]

Within a month of her treatment she has had no migraines, although she still feels headaches here and there.  She feels the pain has dropped down to at least a little more than half of what it used to be. She also states that her nose breathing has been doing well. Her knees also feel better, but she is still not able to run up hill. Her wrist pain has also dropped down to a little less than half of what she felt before. 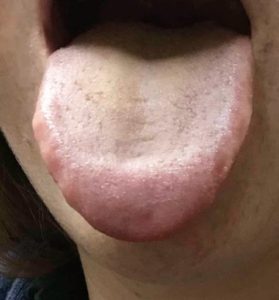 Within six months of treatment she feels that her headaches are now at a pain level range of 0 to 3 out of 10.  She has not had to use Botox for the last 5 months or so.
He knees have improved to being able to climb 200 flight of stairs.
The wrist pain is at 4.5/10 pain level, but now has substantial flexibility.
She notes feeling more exhausted.
She is still currently taking 100-200mg of Verapamil per day for her chest pains and hopes to be able to not have to use them in the future. 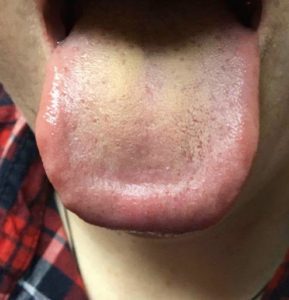